Wharite Peak is a mountain at the southern end of the Ruahine Range, 9 km (5.6 mi) north of Woodville in the Manawatū-Whanganui region of New Zealand. The mountain is home to the main television transmitter for the city of Palmerston North and the wider Manawatu region. 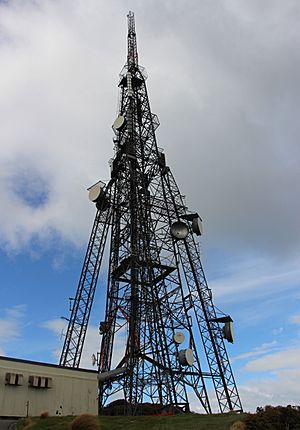 A 1 kW television transmitter was established atop Wharite in 1963, relaying WNTV1 from Wellington. It was replaced with a 100 kW transmitter in 1966.

The following frequencies were used until 29 September 2013, when Wharite switched off analogue broadcasts (see Digital changeover dates in New Zealand).

All content from Kiddle encyclopedia articles (including the article images and facts) can be freely used under Attribution-ShareAlike license, unless stated otherwise. Cite this article:
Wharite Peak Facts for Kids. Kiddle Encyclopedia.