Bunnythorpe is a village in the Manawatu-Wanganui region of New Zealand's North Island, 10 km (6 mi) north of the region's major city, Palmerston North. Dairy farms predominate the surrounding area but the community facilities include Bunnythorpe School, with a roll of about 80 pupils as of 2010 as well as a Rugby Football Club, Country Club and several manufacturing plants. The population was 222 in the 2013 census.

National grid operator Transpower has a large electrical substation near the village. It is the major switching point for high voltage lines in the lower central North Island, and also is responsible for local supply to northern and eastern Palmerston North and the Manawatu district.

The North Island Main Trunk Rail passed over government owned land, which was subdivided and later became Bunnythorpe. The village takes its name from Henry Bunny, the Secretary-Treasurer of the Wellington Provincial Council, which functioned from 1853 to 1876.

On the other side of the rail line, the town of Mugby Junction was to be established. It was proposed in 1878, that the link between the North Island Main Trunk and the Napier line would be here. However plans changed and the junction was located at Palmerston North. The building of Mugby Junction never eventuated. 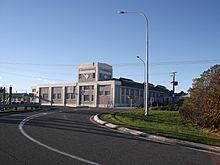 Bunnythorpe gave birth to the Glaxo company and its products. In 1904 Joseph Nathan and Sons founded a baby-food manufacturer which processed local milk into a baby food named Glaxo (sold in the 1930s under the slogan Glaxo builds bonny babies). As of 2010[update], still visible on the main street of Bunnythorpe is the factory for drying and processing cows' milk into powder, with the original Glaxo logo clearly visible, but nothing to indicate the birthplace of a major multinational. Products were made in Bunnythorpe until 1973. As of 2010[update] the building is commercially owned.

The Glaxo company became a major pharmaceutical manufacturer and after a series of mergers it became part of the United Kingdom's GlaxoSmithKline in 2000. In 1979 the Glaxo factory was transformed into the Pantha BMX manufacturing plant, which was the first BMX plant in New Zealand and also the home of the first BMX track.

Bunnythorpe is about midway between the Manawatu region's main city of Palmerston North and its second largest settlement, Feilding. To the east of the village lies Ashhurst, and Kairanga sits to the west. Bunnythorpe is part of the Manawatu Plains and is on relatively flat land, with few rolling hills in surrounding farming properties. Several small streams run through the town: the Mangaone Stream and Jack's Creek run parallel towards the south-west through Palmerston North. Several smaller waterways merge with these streams, passing through Bunnythorpe's south.

Bunnythorpe has a very similar temperate climate to Palmerston North, but temperatures tend to be slightly lower in winter and can be significantly lower during the summer months of December to February. The average summer temperature is 20.6 C and the average temperature during the coldest months of June–August is 11.2 C.

Bunnythorpe is popular among younger children as it is a small community and regarded as quite safe. Children often spend weekends and spare time utilising the open access to the primary school's playgrounds and sporting fields. There is also a Rugby Football Club on Raymond St with clubrooms and this is the site of the ANZAC memorial Cenotaph. The Mangaone Stream bridge off Maple Street on Te Ngaio Road is also popular among the children, with eels and fresh water trout among the catch.

Bunnythorpe is less than 10 minutes' drive from Palmerston North Airport in Milson, where regular flights to Auckland, Wellington, Hamilton, Christchurch and Nelson are available.

The North Island Main Trunk Railway runs through the centre of Bunnythorpe but the trains servicing do not stop in the village. Freight and passenger trains run from between Wellington and Auckland frequently, though passengers must board these services in Palmerston North.

All content from Kiddle encyclopedia articles (including the article images and facts) can be freely used under Attribution-ShareAlike license, unless stated otherwise. Cite this article:
Bunnythorpe Facts for Kids. Kiddle Encyclopedia.