Ashhurst (Māori: Whārite) is a town and outlying suburb of Palmerston North, in the Manawatū-Whanganui region of New Zealand's North Island.

Ashhurst is sited 14 kilometres northeast of the city of Palmerston North and a satellite community of the city. 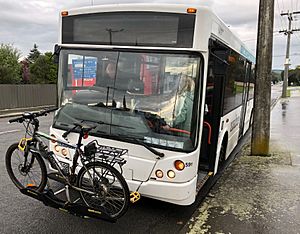 UzaBus from Palmerston North at Ashhurst in 2018

Ashhurst's importance stems from its location at the western end of the Manawatu Gorge. As such, it was close to the easiest road and rail link between the east and west coasts of the southern North Island. However, the Gorge has been closed since April 2017 and the road link to the east coast from Ashhurst is now via Saddle Road.

There are four buses on weekdays and one on Saturdays linking Palmerston North with Ashhurst.

Ashhurst was named for Lord Henry Ashhurst, who owned land in the immediate area. The Māori name for the area is Raukawa, after a native aromatic plant (Pseudopanax edgerleyi), whereas for the town it is Otangaki.

The proportion of people born overseas was 12.9%, compared with 27.1% nationally.

Ashhurst School is a co-educational state primary school for Year 1 to 8 students, with a roll of 412 as of July 2016.

All content from Kiddle encyclopedia articles (including the article images and facts) can be freely used under Attribution-ShareAlike license, unless stated otherwise. Cite this article:
Ashhurst Facts for Kids. Kiddle Encyclopedia.