Arapuni, due to its proximity to Hamilton, plays an important part in voltage support and frequency keeping in the city and the wider Waikato region. Even though it is 80 years old, continuous improvement and refurbishment of the station's generation equipment ensures Arapuni remains efficient.

The powerhouse and dam at Arapuni are under protection of the Historic Places Trust, becoming Category I Historic Places in November 1987 and August 1991 respectively. It is one of the few generating power stations in New Zealand to be listed on the register.

Arapuni was the first government-built hydroelectric station on the Waikato River, and the second after the privately owned Horahora Power Station that was decommissioned in 1947 on the filling of Lake Karapiro.

Initial surveying of the site began in 1916, but in 1920, the surveying was halted due to lack of government funds to progress the project. Construction of Arapuni finally began in 1924, but repeated heavy rain and the resulting floods dogged the early works. The station, complete with three turbines and provisions for a fourth, was commissioned in mid-1929. Shortly after commissioning, Arapuni was closed for two years while a water seepage problem was investigated and the headrace lined. The station, with the addition of a fourth turbine, was recommissioned in May 1932. 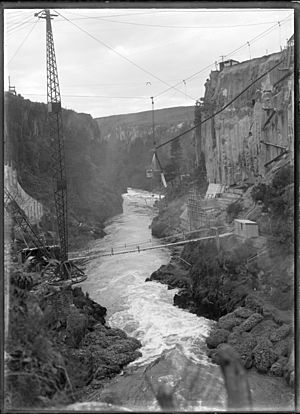 The Arapuni Gorge during the construction of the power station, 1929

Originally, Electricity from Arapuni was stepped up to 110,000 volts and transmitted along two lines (one single-circuit and one double-circuit) to Penrose substation in Auckland, with intermediate substations at Hamilton and Bombay. Electricity was also supplied into the Horahora system via a 110,000/50,000-volt interconnecting transformer. In 1934, a 110,000-volt line was commissioned from Arapuni to Stratford in Taranaki, connecting the station to the Mangahao-Waikeremoana system and on to the lower North Island.

In 1990, a $50 million repair, refurbishment and upgrade project was completed, the first stage of which involved construction of a diversion channel. In 2000 it was determined that the historic seepage problem had worsened, interim repairs were carried out while a more permanent solution was devised and this took the form of a $20 million engineering project, which was carried out in 2005–07. In 2001, work was completed on four of Arapuni's turbines to increase capacity from 24.7 megawatts (33,100 hp) to 26.7 megawatts (35,800 hp) each and to improve their peak efficiency.

All content from Kiddle encyclopedia articles (including the article images and facts) can be freely used under Attribution-ShareAlike license, unless stated otherwise. Cite this article:
Arapuni Power Station Facts for Kids. Kiddle Encyclopedia.