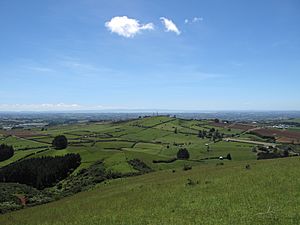 View looking north-west towards Auckland from top of Mount Puketutu

The Bombay Hills are a range of hills to the south of Auckland, New Zealand. Though only a small and seemingly insignificant range of hills, they lie at the southern boundary of the Auckland region, and serve as a divide between Auckland and the Waikato region. There is a 19th-century settlement, Bombay, on the old main road south of Auckland, the Great South Road. Aucklanders and other New Zealanders have a mostly light-hearted "love-hate" relationship. Stereotypically, Aucklanders view parts of the country "south of the Bombay Hills" as provincial and unsophisticated, while the rest of the country sees Aucklanders as brash and arrogant. For this reason, the boundary between Auckland and its southern neighbours bears great significance. People on both sides of the boundary are as likely to use the phrase "New Zealand stops at the Bombay Hills". See also the term Jafa for Aucklanders, and the Watford Gap for a similar cultural border concept in the United Kingdom.

The hills are located 40 kilometres (25 mi) southeast of Auckland, close to the town of Pukekohe. State Highway 1 here reaches its highest point between Auckland and Tirau in the eastern Waikato Region, 134 kilometres (83 mi) to the southeast. Bombay is the nearest settlement to the southern fringe of the Auckland metropolitan area.

The settlement of Bombay and hence the Bombay Hills are directly named after the ship Bombay, which landed in Auckland and brought settlers to the area, originally called Williamson's Clearing, in 1863. The ship itself was named after the Indian city of Bombay (now Mumbai).

While they may appear to be just a spur of the Hunua Ranges, the Bombay Hills are geologically quite distinct, being mainly of volcanic origin. The hills are overlain by Hamilton Ash tephra which has weathered to create some of the best soils for market gardening in New Zealand.

All content from Kiddle encyclopedia articles (including the article images and facts) can be freely used under Attribution-ShareAlike license, unless stated otherwise. Cite this article:
Bombay Hills Facts for Kids. Kiddle Encyclopedia.