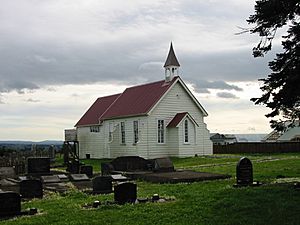 With a population of 29,800 (June 2016), Pukekohe is the 18th largest urban area in New Zealand, and the second largest in the Auckland Region behind Auckland itself.

Pukekohe was part of the Auckland area attacked during the musket war period 1807-1843 by Northern tribes. From the 1820s as a result of these attacks the resident Māori population who survived mainly migrated south. When European settlers arrived the remnant Māori population initially provided them with food supplies. As the number of settlers grew, the Pukekohe area, which was largely bush covered, was opened up after 1843 and individual farmers purchased small blocks of land which they cleared by hand. By 1863 the land was still bush covered but with an increasing number of small isolated farms. When Kīngitanga Māori refused to swear an oath of allegiance to the crown many Māori moved out of the area but some remained. A Māori from this area guided the first gunboats through the Waikato Heads and through the shoals of the Waikato River delta to help put down the rebel Kīngitanga uprising.

A major battle of the 1863 Land Wars was fought at Pukekohe East between 11 armed settlers, who were converting the Pukekohe East church into a redoubt and approximately 200–300 Māori rebels,mainly from the Waikato area. Although surprised and severely outnumbered, the settlers held off the Kīngitanga invaders until troops arrived. No settlers were killed or injured while 30 Māori were killed with an unknown number wounded. 6 bodies were found near the church and 24 were later found buried in the bush. The church still exists today and the bullet holes are still visible.

Although there were many other attacks on settlers in Auckland the Māori preferred isolated targets. As most women and children had been evacuated to Auckland city most of those murdered were men and teenage boys. Rebels were able to hide in the pockets of bush and live off the settlers goods and livestock. Nearly the entire Pukekohe area was abandoned to the rebels apart from Military outposts. Isolated attacks occurred as late as November 1863 after the Battle of Rangiriri.

Pukekohe is a rural service town for the area formerly known as the Franklin District. It has a population of 29,800 (June 2016), mainly of European descent, with significant Māori and ethnic Indian and East Asian communities. There are also a notable number of people of South African and Dutch descent. The population growth from 2007 to 2008 was 2.2 percent.

The small community of Buckland is on the south-east side of Pukekohe, between Pukekohe and Tuakau, and adjacent to the boundary with the Waikato region. Buckland has an historical hall and a primary school.

Pukekohe Train Station is on the North Island Main Trunk Railway and is the southernmost station of the Auckland rail network, at the end of the Southern Line. The southern portion of the line between Papakura and Pukekohe is not electrified, so diesel shuttles connect Pukekohe with electric trains at Papakura.

There is also a bus service to Papakura provided by Waka Pacific.

All content from Kiddle encyclopedia articles (including the article images and facts) can be freely used under Attribution-ShareAlike license, unless stated otherwise. Cite this article:
Pukekohe Facts for Kids. Kiddle Encyclopedia.