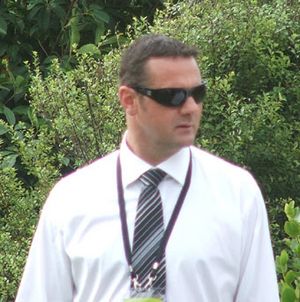 He was a right arm medium pace swing bowler. He played in 32 Test matches and 42 one-day internationals for the New Zealand national cricket team. Doull took his career best bowling figures of seven for 65 in the Boxing Day Test in 1998 against India at the Basin Reserve in Wellington. Due to that performance, he reached a career-high ranking of 6 in the ICC Player Rankings on December 26, 1998.

All content from Kiddle encyclopedia articles (including the article images and facts) can be freely used under Attribution-ShareAlike license, unless stated otherwise. Cite this article:
Simon Doull Facts for Kids. Kiddle Encyclopedia.