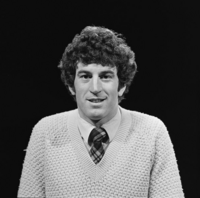 Franciscus Johannes "Frank" Erik Kramer (27 November 1947 – 30 November 2020) was a Dutch footballer. He played as a striker, television presenter and football commentator. Kramer was born in Amsterdam. His career lasted from 1970 to 1984.

Kramer played for Amsterdam, MVV Maastricht, Telstar, Volendam and Haarlem. He also made appearances on television sports networks as a commentator for AVRO and Eurosport.

Kramer suffered from a stroke on his 73rd birthday and fell in a coma. He died three days later in Amsterdam on 30 November 2020.

All content from Kiddle encyclopedia articles (including the article images and facts) can be freely used under Attribution-ShareAlike license, unless stated otherwise. Cite this article:
Frank Kramer (Dutch footballer) Facts for Kids. Kiddle Encyclopedia.