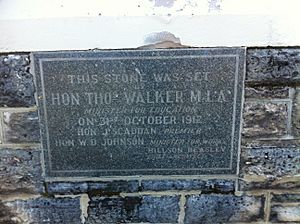 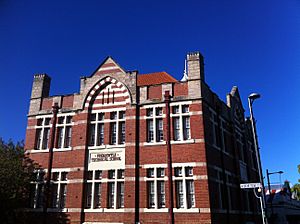 The public school was later transformed into a technical school, in 1902.

Hillson Beasley, the chief architect of the Public Works Department of Western Australia, approved the plans for the Fremantle Technical School on 20 July 1912.

Planned as the western wing of the old school, the building was estimated to cost £5,000. It has 270 feet (82 m) of frontage along South Terrace and was made from brick with a local limestone base. It features a Donnybrook plinth and facings, and a roof of Marseilles tiling. Designed to have ten new classrooms each to hold 30 students it provided access to the first floor via a wide stairway opening onto a large landing. Each floor had five classroom with the rooms on the ground floor surrounding a large open hall space.

The foundation stone was laid by the then Minister for Education, Thomas Walker, on 31 October 1912.

The brick and tile building was built in the Federation Free Style with banded stucco and stone.

The official opening of the building was held on 16 July 1913, although classes had been held in some classrooms prior to the event. It was opened by Thomas Walker together with the Mayor of Fremantle, Frederick James McLaren, in attendance.

All content from Kiddle encyclopedia articles (including the article images and facts) can be freely used under Attribution-ShareAlike license, unless stated otherwise. Cite this article:
Fremantle Technical School Facts for Kids. Kiddle Encyclopedia.