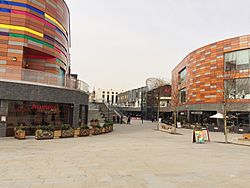 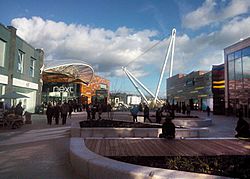 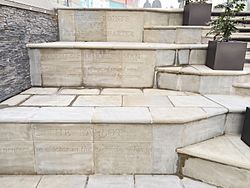 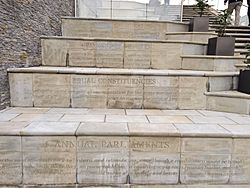 Friars Walk is a partially under-cover shopping centre and leisure complex in Newport city centre, South Wales. It has several levels and includes a range of high street shops, eateries, a cinema, a bowling alley and a soft play area. The complex is linked by the redeveloped John Frost Square to the Kingsway Shopping Centre, Newport Museum, Art Gallery and Central Library and Newport bus station. The complex is a short walk from the high street shops of Commercial Street and High Street. Newport railway station is also a short walk away.

The Friars Walk car park holds 350 cars and over 1000 spaces are available in the adjacent Kingsway multi-storey car park, both accessed from the A4042 Kingsway. There are cycle racks located in Usk Plaza.

The steps connecting Usk Plaza to John Frost Square are inscribed with the six points of the People's Charter to commemorate the Chartist movement and the Newport Rising of 1839 led by John Frost.

The original plans by Modus Corovest were scrapped in 2009 because of the recession but revived in a downsized £100 million scheme by Queensberry Real Estate in 2012. Plans included a six-screen cinema, ten pin bowling alley, eight restaurants and a 350 space carpark. A new bus station was also included, with finance coming from a £90 million loan from Newport City Council.

The new design was by Leslie Jones Architecture. Construction began in April 2014. The scheme opened on 12 November 2015, raising Newport from 200th to 77th in the UK's retail rankings and heralded as a "lifeline for Newport". The total cost came to £117 million.

All content from Kiddle encyclopedia articles (including the article images and facts) can be freely used under Attribution-ShareAlike license, unless stated otherwise. Cite this article:
Friars Walk, Newport Facts for Kids. Kiddle Encyclopedia.