Furzton is a district in West Milton Keynes in the civil parish of Shenley Brook End, Buckinghamshire, England. The man-made Furzton Lake is a balancing lake that covers approximately half of the district.

The housing in South Furzton was built sometime around the early to mid-1980s, with the Parkside/Favell Drive housing to the East coming first – development then moved West along Blackmoor Gate. The shops were constructed after 1984 – prior to this time, the nearest local shops were at Melrose Avenue, in Bletchley.

Prior to the construction of North Furzton, the land on the northern side of the brook in the linear park was farmland – thus, residents of South Furzton had only a short walk to reach open countryside. When plans were announced for North Furzton, in particular the extension of Dulverton Drive to form the link between the two sides, residents' meetings were held in protest at what residents expected would be a significant increase in traffic. Most of the South Furzton housing was complete when the construction of the lake started.

North Furzton housing and shops were built between 1990 and 2004.

Church of the Servant King 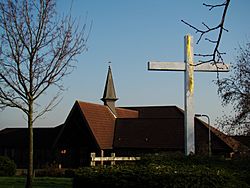 Church of the Servant King, Furzton

The Church of the Servant King, Furzton is an ecumenical church located in Furzton, Milton Keynes. The church forms part of the Watling Valley Ecumenical Partnership. The congregation of the church started meeting in a community house in the local area, led by a Church Army sister. As numbers grew, they moved first to the Meeting Place in South Furzton, then to Coldharbour School. The present church building was used from June 1992 onwards, with the official opening in September 1992. The building is shared with the Ridgeway Community Centre.

All content from Kiddle encyclopedia articles (including the article images and facts) can be freely used under Attribution-ShareAlike license, unless stated otherwise. Cite this article:
Furzton Facts for Kids. Kiddle Encyclopedia.