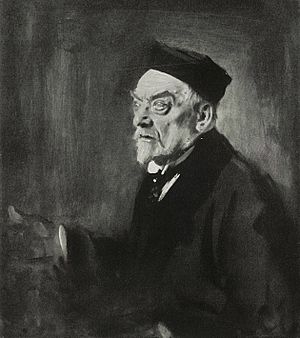 Portrait of Gabriel von Hackl by an unknown artist

Gabriel von Hackl (24 March 1843 – 5 June 1926) was a German-Austrian artist and art teacher. Most of his paintings were of historical subjects.

Hackl was born in Marburg an der Drau. At that time the town was part of Austria. Today it is part of Slovenia. His father was a surgeon. He learned anatomy from his father. He then studied art in Vienna. In 1865 he moved to Munich and studied at the Munich Academy of Fine Arts. He became a professor of drawing at the academy in 1880 and taught there until 1919. Hackl was a strict teacher. He wanted his students' drawings to be anatomically accurate. They learned by drawing plaster casts of ancient sculptures. His own drawings were very skillful and detailed.

Hackl died in Munich at the age of 83. His famous pupils included Anton Ažbe and Giorgio de Chirico.

All content from Kiddle encyclopedia articles (including the article images and facts) can be freely used under Attribution-ShareAlike license, unless stated otherwise. Cite this article:
Gabriel von Hackl Facts for Kids. Kiddle Encyclopedia.