Galaxias tantangara, the stocky galaxias, is a galaxiid of the genus Galaxias, a member of the Mountain Galaxias species complex group of freshwater fish, found in Australia.

As for other members of the species complex with a long tubular body which is distinctly stocky, particularly between the vent and the pectoral fins. Tail fin generally as long or slightly longer than the caudal peduncle with a square or slightly notched end. Flanges on the caudal peduncle are long, extending almost half way to the anal fin. Centreline fins are somewhat fleshy at the base, paired fins less so. Fins generally rounded and paired fins set low on the body. Medium sized head, wider than deep, top of head between the eyes flat to slightly convex with the eyes well below the upper surface of the head. Mouth has a wide gape with the lower jaw being about 80-90 percent of the upper jaw length. Length up to 103 millimetres (4.1 in), commonly 75–85 millimetres (3.0–3.3 in). 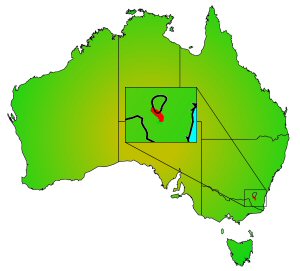 Reported only from the headwaters of Tantangara Creek above Tantangara Reservoir in the upper Murrumbidgee River system at an elevation of 1,360 metres (4,460 ft). Found only above a minor waterfall below which alien trout are present. Restricted to about 4 kilometres (2.5 mi) of stream between the waterfall and the streams source at 1,630 metres (5,350 ft).

Galaxias tantangara is found in a cold, clear and rapidly flowing alpine creek which flows through open Eucalypt forest with small shrubs and tussock grasses and is often covered with winter snow. The creek is about 80 centimetres (2.6 ft) wide and 10 centimetres (3.9 in) deep with pools around 30 centimetres (12 in) deep. Stream bed consists of bedrock and large to small rounded stones with some pebbles, gravel and areas of silt. Cover is mostly provided by rock, undercut banks, overhanging vegetation and pools. The fish is able to withstand very cold water, below 5 °C (41 °F).

All content from Kiddle encyclopedia articles (including the article images and facts) can be freely used under Attribution-ShareAlike license, unless stated otherwise. Cite this article:
Galaxias tantangara Facts for Kids. Kiddle Encyclopedia.