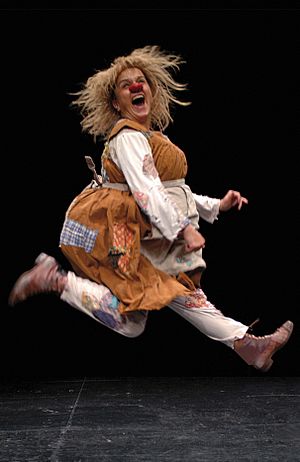 Gardi Hutter (born 5 March 1953, in Altstätten) is a Swiss Clown-comedian, author, actress and Cabaret artist and a clown of the classical rule.

Born on 5 March 1953 in Altstätten, Canton of St. Gallen in Switzerland, Gardi Hutter graduated at the Academy of Dramatic Arts in Zürich (Schauspiel-Akademie Zürich) from 1974 to 1977, where she absolved an induction and training in theatre education and theatre pedagogy. Gari Hutter gave lessons to the students, but she felt unhappy not to practice what she taught. At the Centro di ricerca per il teatro (CRT) in Milano Gardi Hutter graduated as maestros (master), being also her so-called Clownsgesellenzeit (literally: apprenticeship as a clown) of three years to become an approved member of the Clown community. Gardi Hutter was taught by Mario Gonzales, Pantalone of the Théatre du Soleil, Nani Colombaioni (I Colombaioni) and Ferruccio Cainero of the Teatro Ingenuo.,

For the national "700-year anniversary" of Switzerland, Gardi Hutter played the women jester in the Federal Assembly Chamber of the Swiss Parliament in 1991. For the festival "700 years" of 1998 of her hometown, Gardi Hutter acted as co-writer. In the winter season 1997/98 she was starring in Romulus der Grosse at the Schauspielhaus Zürich.

Since 1981, Gardi Hutter had more than 3,300 performances in 30 countries and four continents, including Andorra, Brazil, China, Russia, Spain, Sweden, USA and Switzerland. There were also recordings on TV stations of 17 countries and auditions in numerous radio programs.

Since 1981, Gardi Hutter is touring with her so-called Clowneskes Theater, so far in concert halls, playhouses, barns and culture houses, in festivals and also favelas in Latin America. Gardi Hutter designed a new segment of the Cabaret theater in Switzerland and in neighbouring countries. As her clown theatre bases not on linguistic mediation, live performances and recordings were also done in Eastern Europe, Southern and Northern America.

Gardi Hutter's wrote as of November 2014 four "mamma mia!" children's books, three of them illustrated by Catherine Louis, that are translated into several languages; one was produced exclusively as an audiobook.

Gardi Hutter was honoured since 1987 by numerous national, but also international awards, among them:

All content from Kiddle encyclopedia articles (including the article images and facts) can be freely used under Attribution-ShareAlike license, unless stated otherwise. Cite this article:
Gardi Hutter Facts for Kids. Kiddle Encyclopedia.