The Garfield County Courthouse is a historic courthouse building located in Enid, Oklahoma. It is on the National Register of Historic Places both individually and as a part of the Enid Downtown Historic District. 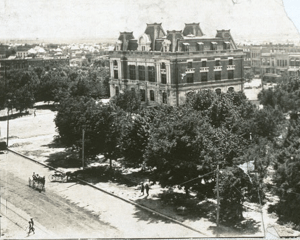 Enid's first courthouse opened on April 1, 1896. It consisted of a two-story brick building, which the County soon outgrew. Enid's second courthouse was built by O.A. Campbell of Oklahoma City in 1907 from Oklahoma granite and Indiana stone. The building was located in the center of Broadway, surrounded by sidewalks, and fully landscaped. Its south side was located where the front of the Enid Post Office is now. (Enid's post office used to be where the public library is located now, and Enid's public library was a Carnegie building located at 402 North Independence.) On January 29, 1931, a fire broke out in the jail and spread to the roof, then quickly spread to the rest of the building. All prisoners were safely evacuated, and county records were rescued. From 1931 to 1936, the County operated out of an agricultural building, and later the Broadway Tower. 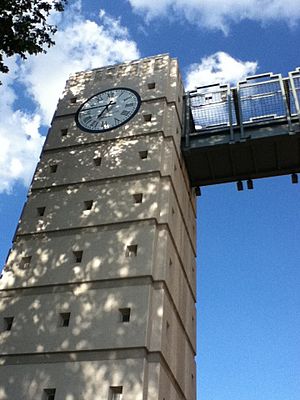 The clock tower of the Garfield County Courthouse.

All content from Kiddle encyclopedia articles (including the article images and facts) can be freely used under Attribution-ShareAlike license, unless stated otherwise. Cite this article:
Garfield County Courthouse (Oklahoma) Facts for Kids. Kiddle Encyclopedia.