The Garfield Thomas Water Tunnel is the U.S. Navy's principal experimental hydrodynamic research facility and is operated by the Penn State Applied Research Laboratory. The facility was completed and entered operation in 1949. The facility is named after Lieutenant W. Garfield Thomas Jr., a Penn State journalism graduate who was killed in World War II. For a long time, the Garfield Thomas Water Tunnel was the largest circulating water tunnel in the world. It has been declared a historic mechanical engineering landmark by the American Society of Mechanical Engineers.

Today, in addition to many of its Navy projects, the facility tunnel-based research has expanded into pumps for the Space Shuttle, advanced propulsors for ships, heating and cooling systems, artificial heart valves, vacuum cleaner fans, and other pumps and propulsors related products.

The Garfield Thomas Water Tunnel was built at Penn State in cooperation with ORL by the ARL for further torpedo research. Construction completed on October 7, 1949, and began operating six months later. Since then, the facility has expanded into viscosity, sound, wave, and wind research.

In 1992, the facility underwent a complete overhaul. 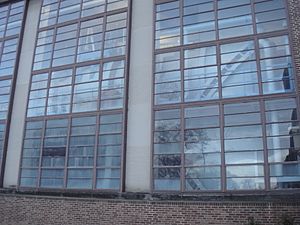 The main water tunnel can be seen from the outside through the glass windows.

The facility consists of a number of closed circuit, closed jet and open jet facilities.

Both tunnels are equipped with lasers, pressure sensors, pressure transducers, and hydrophones 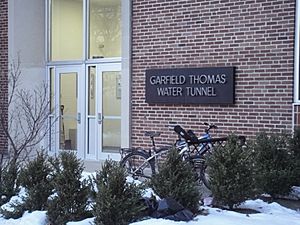 In addition to the water tunnels, the facility operates an array of wind tunnels, glycerin tunnels, and anechoic chamber for used in many physics problems. The Boundary Layer Research Facility (BLRF) operates a 12-inch turbulent pipe flow of glycerine. Additionally, the facility operates a 20 hp (14.91 kW), open-jet, 1,750 rpm Axial-Flow Fan with a 36.58 m/s (81.83 mph) maximum velocity used for basic engineering research in turbomachinery blading. Another 2.75 meter diameter, 100 hp (74.6 kW) closed-circuit used specifically for research in viscous sublayer and in modeling of turbulent flow of fluids next to a wall at large scale.

All content from Kiddle encyclopedia articles (including the article images and facts) can be freely used under Attribution-ShareAlike license, unless stated otherwise. Cite this article:
Garfield Thomas Water Tunnel Facts for Kids. Kiddle Encyclopedia.