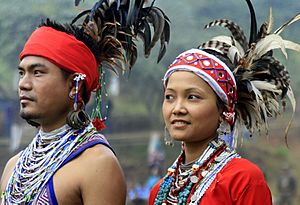 A Garo couple in traditional dress

The Garos are a tribal people in Meghalaya, Republic of India and neighboring areas of Bangladesh, who call themselves A·chik Mande (literally "hill people," from a·chik "hill" + mande "people") or simply A·chik or Mande. They are the second-largest tribe in Meghalaya after the Khasi and comprise about a third of the local population. The Garos are one of the few remaining matrilineal societies in the world.

All content from Kiddle encyclopedia articles (including the article images and facts) can be freely used under Attribution-ShareAlike license, unless stated otherwise. Cite this article:
Garo people Facts for Kids. Kiddle Encyclopedia.