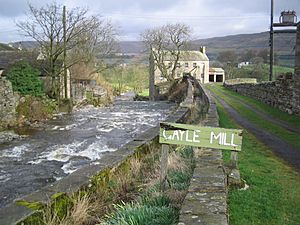 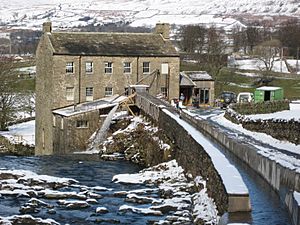 Gayle Mill, dating from about 1784, is thought to be the oldest structurally unaltered cotton mill in existence. It is located in the Wensleydale hamlet of Gayle, England, 1 mile (2 km) south of the market town of Hawes. It lies within the Yorkshire Dales National Park. The mill is owned by the North of England Civic Trust (NECT); it has been operated by a local volunteer group, the Gayle Mill Trust, which paid a modest rent to the owner. The property was closed in March 2018 because major repairs were required to make it safe.

The Grade II* listed mill was built by local hosiers and land owners Oswald and Thomas Routh as a water-powered cotton mill, and was powered by a 22 feet (7 m) diameter overshot waterwheel. It was turned over to flax and wool spinning by 1813 for the local knitting industry. For a period in the 19th century, it was used for domestic accommodation.

It was converted to a sawmill around 1879. The waterwheel was removed and replaced with a Thomson double-vortex turbine, built by Williamsons (now Gilbert Gilkes & Gordon Ltd) of Kendal. This is thought to be the only remaining working variety of its type. In its heydey, the 10 hp (7.46 kW) created by the turbine drove a range of woodworking machinery – a rack sawbench, circular saw, thicknesser (planer), and lathes – by a series of belts and pulleys off a central line shaft.

In 1919, part of the mill was hired to provide electricity to the area using turbines for the generator. The mill provided electricity for the village until 1948.

Gayle Mill closed in 1988, after over a century of operation as a sawmill, and it seemed likely it would be converted into luxury flats. In 2004 its plight came to national attention when it featured in the second series of BBC2's Restoration programme. It won the regional heat and came in the top three in the national finals. Restoration of the mill started in the same year and works to bring the site to operational standard took four years and cost over £1 million. Funding for the renovation came from several sources including the Heritage Lottery Fund, English Heritage and Yorkshire Forward.

Gayle Mill re-opened to the public in 2008. Restoration's host Griff Rhys Jones returned to Gayle Mill in 2009 to film an update on the restoration work.

In 2012 Gayle Mill was featured on Channel 4's How Britain Worked, presented by Guy Martin.

The mill was open for tours and heritage skills training courses, with fully restored machines and turbines being demonstrated by the Gayle Mill Trust.

The Gayle Mill Trust was advised by NECT in early 2018 that the mill would need to be closed for repairs. NECT would need to remedy problems, including some that were created during the restoration, in order to ensure safety and to comply with insurance regulations. The site was vacated on 31 March 2018. The Gayle Mill Trust was hoping that the work could be completed in time to reopen it at Easter 2019. NECT told the news media that it did intend to repair the mill, contrary to rumours that other uses were being considered for the property. Fund raising was under way in summer 2018. The timber and woodworking services division of the mill continued to operate from another site using wood that had been previously processed.

All content from Kiddle encyclopedia articles (including the article images and facts) can be freely used under Attribution-ShareAlike license, unless stated otherwise. Cite this article:
Gayle Mill, North Yorkshire Facts for Kids. Kiddle Encyclopedia.