The House at Gelli Aur Country Park, viewed from the Arboretum walk, August 2005. 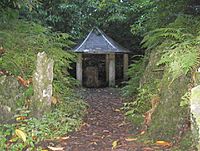 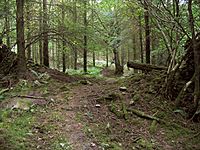 Gelli Aur is a country park with 60 acres (240,000 m2) of wooded parkland surrounding Golden Grove mansion. It was once the home of the Vaughan and Cawdor families. The park featured a number of nature trails, a 20-acre (81,000 m2) deer park, a 10-acre (40,000 m2) Aboretum planted in the 1860s. The park was managed for many years by Carmarthenshire County Council. The Mansion features crow stepped gables, a battlemented portico and tall polygonal chimney stacks. The original Vaughan mansion, built between 1565 and 1570, no longer exists. In 1804 the last of the Vaughans died childless and the Gelli Aur estate passed to the Cawdor family. It was they who built the present mansion between 1827 and 1832. The mansion is now privately owned, and a long programme of restoration is underway.

Since the middle of the 20th century, the house has had a checkered history. During World War Two, it housed American airmen. In more recent times, the big house was leased to Carmarthenshire County Council, and one of the five campuses of Carmarthenshire College (Coleg Sir Gâr) was located there.

In 2015, as part of a ten-year plan to restore the destination, a grant of close to £1 million was arranged with the Welsh Government. The first stage including enabling public access to the parkland and gardens with tea-rooms, a play area, educational activities and trails. The match funding necessary for the third year phase of works did not materialise and therefore the majority of the grant could not be drawn down.

All content from Kiddle encyclopedia articles (including the article images and facts) can be freely used under Attribution-ShareAlike license, unless stated otherwise. Cite this article:
Gelli Aur country park Facts for Kids. Kiddle Encyclopedia.