The White Pigeon land office was located on the Chicago Road (Sauk Trail), which linked Chicago and Detroit. The first settler in Kent County, Michigan to buy land from the office was Louis Campau in October 1833.

The U.S. started issuing land in Michigan after the Treaty of Chicago, in which the Potawatomi and other tribes turned over their land, was signed in 1821. The White Pigeon land office operated for about 4 years from 1831-1834. During that time over a quarter million acres of land were sold from this office at a rate of $1.25 per acre.

The land office was listed on the National Register of Historic Places on February 7, 1989.

The White Pigeon land office is the oldest building in Southwest Michigan and one of the oldest in the state.

The land office was built in the Greek Revival architectural style; the architect is unknown. It is located in downtown White Pigeon. The building may at one time been used as a secret meeting hall. 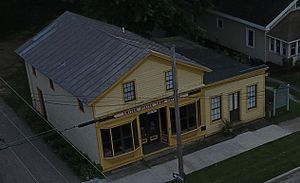 All content from Kiddle encyclopedia articles (including the article images and facts) can be freely used under Attribution-ShareAlike license, unless stated otherwise. Cite this article:
General Land Office (White Pigeon, Michigan) Facts for Kids. Kiddle Encyclopedia.