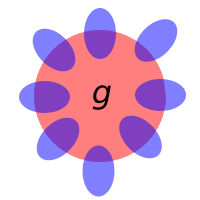 Charles Spearman, an early statistician and psychologist, found that school children's grades across unrelated subjects were strongly related to each other. That is to say, children who were good at one area (such as reading) were also good in another area (such as math). He then proposed that these relationships reflected the influence of a dominant factor, which he called g for "general" intelligence. He developed a model where all variation in intelligence test scores can be explained by two factors. The first is the factor specific to an individual mental task: the individual abilities that would make a person more skilled at one cognitive task than another. The second is g, a general factor that governs performance on all cognitive tasks.

After 120 years of cognitive testing, gs central role is still a meaningful measure. Other models have also been proposed, and there is significant controversy about g and its alternatives.

All content from Kiddle encyclopedia articles (including the article images and facts) can be freely used under Attribution-ShareAlike license, unless stated otherwise. Cite this article:
General intelligence factor Facts for Kids. Kiddle Encyclopedia.