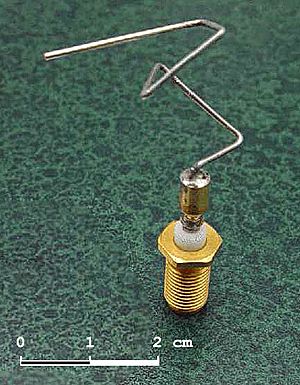 The unusual form of this antenna, developed by NASA, was found using a genetic algorithm.

Natural evolution can be modeled as a game, in which the rewards for an organism that plays a good game of life are the passing on of its genetic material to its successors and its continued survival. In natural evolution, how well an individual performs depends on its who it works with and who it competes with, as well as the environment. Genetic algorithms are a simulation of natural selection on a population of candidate solutions to an optimization problem (chromosomes, individuals, creatures, or phenotypes).

Candidates are evaluated and crossbred in an attempt to make good solutions. Such solutions may take a lot of time and are not obvious to a human. An evolutionary phase is started with a population of randomly generated beings. In each generation, the fitness of every individual in the population is evaluated. Some are randomly selected from the current population (based on their fitness) and modified (recombined and possibly randomly mutated) to form a new population. The cycle repeats with this new population. The algorithm ends either after a set number of generations have passed, or a good fitness level has been reached for the population. If the algorithm has ended due to reaching a maximum number of generations, it does not necessarily mean a good fitness level has been obtained.

All content from Kiddle encyclopedia articles (including the article images and facts) can be freely used under Attribution-ShareAlike license, unless stated otherwise. Cite this article:
Genetic algorithm Facts for Kids. Kiddle Encyclopedia.