Gentiana clausa, one of several plants with the common name "bottle gentian", is a 1'–2' tall flowering plant in the Gentianaceae family. It is native to Eastern North American moist meadows and woods at higher elevations, from Quebec in the north, through the Appalachian range to North Carolina and Tennessee in the south. It has paired, lanceolate leaves, usually on unbranched stalks, and blue blooms which remain closed or nearly so (thus the Latin specific name). It flowers from late August to October. 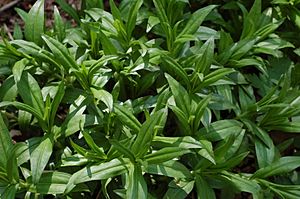 All content from Kiddle encyclopedia articles (including the article images and facts) can be freely used under Attribution-ShareAlike license, unless stated otherwise. Cite this article:
Gentiana clausa Facts for Kids. Kiddle Encyclopedia.