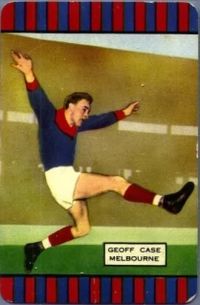 Geoff Case (18 September 1935 – 22 June 2018) was an Australian rules footballer. He played in the Victorian Football League (VFL). He was born in Victoria, Australia.

Case was a tough midfielder and played his 122 VFL games for Melbourne, which included the 1955, 1957, 1959 and 1960 winning grand finals. He also represented the VFL, but retired at the relatively young age of just twenty-six in 1962.

All content from Kiddle encyclopedia articles (including the article images and facts) can be freely used under Attribution-ShareAlike license, unless stated otherwise. Cite this article:
Geoff Case Facts for Kids. Kiddle Encyclopedia.