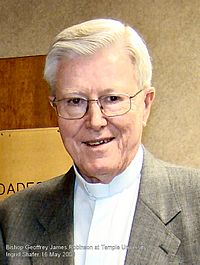 Geoffrey James Robinson (10 August 1937 – 29 December 2020) was an Australian Roman Catholic prelate. He was born in Sydney. He became Roman Catholic Archdiocese of Sydney in 1960. He taught canon law at the Catholic Institute of Sydney. In 1984, he was named an auxiliary bishop of Sydney. Robinson retired in 2004.

All content from Kiddle encyclopedia articles (including the article images and facts) can be freely used under Attribution-ShareAlike license, unless stated otherwise. Cite this article:
Geoffrey Robinson (bishop) Facts for Kids. Kiddle Encyclopedia.