Gertrud Caspari (March 22, 1873 in Chemnitz - June 7, 1948 in Klotzsche, Dresden) was one of the most important German children's book illustrators in the first half of the 20th century, and is recognised as the creator of a "modern toddler" or "Caspari" style.

Gertrud Caspari was born in Chemnitz in 1873 as the fourth of five children of the merchant Robert Caspari. After the death of her father in 1888, the family moved to Dresden in 1894. Gertrud Caspari worked as a governess for a year, and then studied at the Dresden School of Applied Arts from 1895 to 1898, training to be a teacher. However, she fell seriously ill in 1897 from Graves' disease, which kept her bedridden for many years. It was during that time that she had the idea for a first illustrated children's book.

Her first picture book appeared in 1903 under the title The Living Toy. The following year, she successfully participated in the Arts and Crafts Exhibition in Leipzig, where she showed frieze designs in appliqué. She regularly received orders to illustrate children's books, and also illustrated textbooks and songbooks. 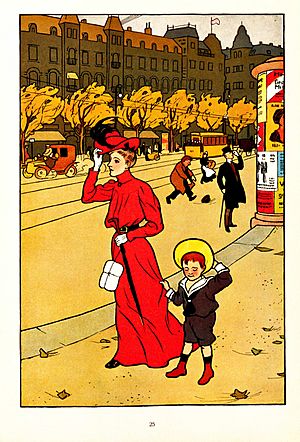 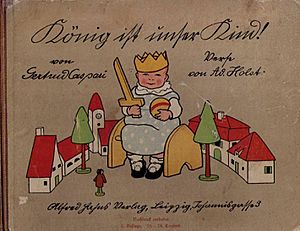 In 1906, she and her brother Walther Caspari, who worked as a graphic designer for political magazines, were commissioned by the Leipzig teacher's association to create the picture book Kinderhumor für Auge und Ohr (Children's Humor for Eye and Ear). The book was published in 1906 by Verlag Alfred Hahn in Leipzig and established a 40-year cooperation between the publisher and Gertrud Caspari. The author Adolf Holst wrote verses for many of the illustrations.

Her brother Walther died in 1913 at the age of 44, leaving Gertrud Caspari to carry on the work alone. The following year she moved from one part of Dresden, Bühlau, to another, Klotzsche, where she lived until the end of the Second World War. During the time of Nazi Germany, she illustrated educational books for the Ministry of Propaganda. After the war, she was charged with collaboration. Caspari lost her apartment in Klotzsche and spent her last years in Lößnitz in the Erzgebirge, where she lived in poverty.

Caspari published over 50 of her own children's books with illustrations, and illustrated more than 20 other works by other authors. In addition, she designed postcards, games, calendars and even porcelain figures. In 1927, she created murals and stained glass windows for a children's rest home in Jetřichovice (German: Dittersbach) in the district of Tetschen (now in the Czech Republic). Her illustrations of baby animals and their parents formed the basis of early arithmetic for many children in the 1920s.

Caspari is considered the creator of a "modern toddler style", which is also referred to as "Caspari style". "Her painting is characterized by large areas, often monochrome backgrounds, simple perspectives, sharp contours, simple figures and a bright-warm color." She also drew scenes of her Saxon homeland.

For Caspari, the format of the book and the thickness of the pages were important in terms of child-friendly handling and she chose materials accordingly. The estate and rights of her works are managed by the Gertrud Caspari Family Foundation. Some of the books have been reissued by the foundation. 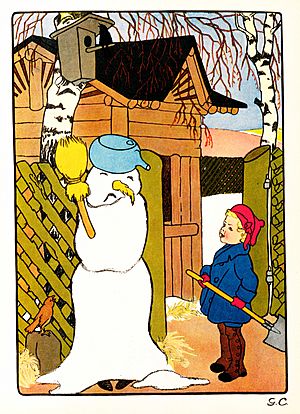 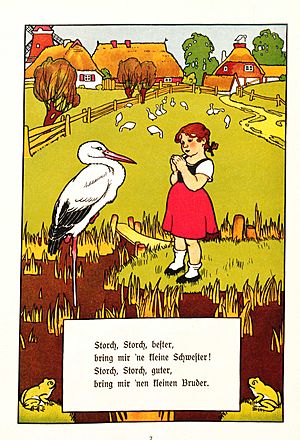 Titles have been translated into English from the original German. 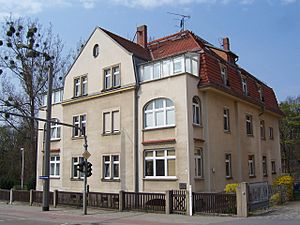 Shortly before her death, she moved back to Dresden. Caspari died on June 7, 1948 in a hospital in Dresden of complications from a middle ear operation. Her grave is located in the New Cemetery in Dresden-Klotzsche.

In 1954, a street in Klotzsche, Dresden was named after Gertrud Caspari. Her home on the Königsbrücker Landstraße 3 has been preserved. In 1998, a memorial plaque was placed on the house commemorating the well-known former resident. In addition, a primary school in the district bears the name Gertrud Caspari.

All content from Kiddle encyclopedia articles (including the article images and facts) can be freely used under Attribution-ShareAlike license, unless stated otherwise. Cite this article:
Gertrud Caspari Facts for Kids. Kiddle Encyclopedia.