Geum urbanum, also known as wood avens, herb Bennet, colewort and St. Benedict's herb (Latin herba benedicta), is a perennial plant in the rose family (Rosaceae), which grows in shady places (such as woodland edges and near hedgerows) in Europe and the Middle East. It has been introduced in North America, where it forms natural hybrids with Geum canadense (= Geum ×catlingii J.-P. Bernard & R. Gauthier). 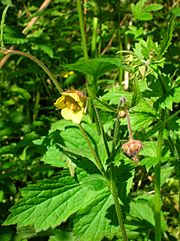 Geum urbanum hybridizes fairly regularly with Geum rivale (water avens), as they are closely related and occur together. In fact, the phenomenon is so conspicuous that hybrids were once treated as a species, named Geum intermedium Ehrh.

Usually reaching a height between 20 and 60 cm, wood avens blooms between May and August, and its flowers are 1 – 2 cm in diameter, having five bright yellow petals. The hermaphrodite flowers are scented and pollinated by bees. The fruits have burrs, which are used for dispersal by getting caught in the fur of rabbits and other animals. The roots contain the compound eugenol which is also present in cloves and are used as a spice in soups and also for flavouring ale. 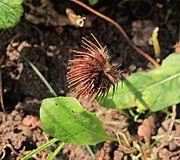 In folklore, wood avens is credited with the power to drive away evil spirits, and to protect against rabid dogs and venomous snakes. It was associated with Christianity because its leaves grew in threes and its petals in fives (reminiscent of, respectively, the Holy Trinity and the Five Wounds). Astrologically, it was said to be ruled by Jupiter.

Herbalists use wood avens to treat various diseases, but there is no scientific evidence it has any benefit.

All content from Kiddle encyclopedia articles (including the article images and facts) can be freely used under Attribution-ShareAlike license, unless stated otherwise. Cite this article:
Geum urbanum Facts for Kids. Kiddle Encyclopedia.