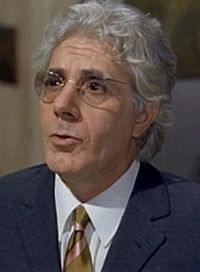 Gianrico Tedeschi (20 April 1920 – 27 July 2020) was an Italian actor. He was born in Milan, Italy. His career lasted between 1943 to 2013. He appeared in over 100 movies and television shows. His best known roles were in Susanna Whipped Cream, Il merlo maschio and in Dr. Jekyll Likes Them Hot.

In April 2020, Tedeschi celebrated his 100th birthday. He died three months later on 27 July 2020 at his home in Pettenasco, Italy from congestive heart failure.

All content from Kiddle encyclopedia articles (including the article images and facts) can be freely used under Attribution-ShareAlike license, unless stated otherwise. Cite this article:
Gianrico Tedeschi Facts for Kids. Kiddle Encyclopedia.