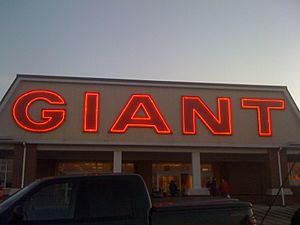 Sign from the former Giant chain still attached to a store in Vestal, NY several months after its takeover by Weis Markets

Giant Markets, also known as Giant Food Markets, was a supermarket chain based in Binghamton, New York. Founded in 1933 by Metrie and George Akel, it was the first self-service supermarket in New York. The company eventually operated twelve supermarkets in the Greater Binghamton area. Giant sold their franchise to Weis Markets in August 2009.

All Giant Markets featured an extremely bright fluorescent lighting system that stretches across the store.

On Thursday, May 21, 2009, Giant Markets was bought by Weis Markets. According to notices received by Giant associates, as of August 23, 2009 their employment ended at Giant Markets, and most of the 1,100 employees were expected to have jobs at Weis.

On Wednesday, August 12, 2009, Giant Markets announced that it was closing its store at 56 Main Street in Binghamton effective Saturday, August 15 at 6:00pm, one week prior to the takeover date. All associates at that store were transferred to other Giant Markets locations. The store closure is a decision made by Weis Markets as part of the buyout.

All content from Kiddle encyclopedia articles (including the article images and facts) can be freely used under Attribution-ShareAlike license, unless stated otherwise. Cite this article:
Giant Markets Facts for Kids. Kiddle Encyclopedia.