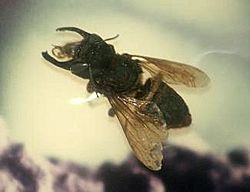 It was believed to be extinct until several specimens were found in 1981. No more were found until two were collected and sold on eBay in 2018. A live female was found and filmed for the first time in 2019.

It is in the Megachilidae family of bees, which carry pollen on their underside. It is about 4 cm long and has a 6 cm wingspan.

Wallace's giant bees build communal nests inside active nests of a tree-dwelling termite. This may have hidden their existence even from island residents. The bee uses tree resin to build compartments inside the termite nest, which protects its galleries. Female bees leave their nests repeatedly to forage for resin. The bee's large jaws help to gather resin: the female makes large balls of resin which are held between the jaws. The association of the bee with the termite may be obligate (it must live there).

All content from Kiddle encyclopedia articles (including the article images and facts) can be freely used under Attribution-ShareAlike license, unless stated otherwise. Cite this article:
Giant bee Facts for Kids. Kiddle Encyclopedia.