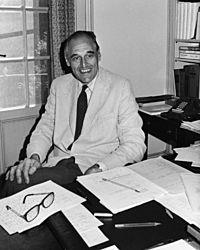 Giles Constable (1 June 1929 – 17 January 2021) was a British historian of the Middle Ages. He was mainly interested in the religion and culture of the 11th and 12th centuries. He mainly focused abbey of Cluny and its abbot Peter the Venerable. Constable was born in London.

All content from Kiddle encyclopedia articles (including the article images and facts) can be freely used under Attribution-ShareAlike license, unless stated otherwise. Cite this article:
Giles Constable Facts for Kids. Kiddle Encyclopedia.