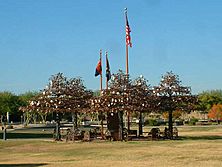 Glendale Veterans War Memorial also known as the Glendale USS Arizona Memorial (2002) is a monument to United States veterans of all wars. It is located on the lawn in front of the Glendale Public Library at 5959 West Brown Street, Glendale, Arizona. It was created by artist Joe Tyler with assistance from ceramist Scott Cisson and sculptor Sylvania Anderson. The monument includes pieces of the USS Arizona, a battleship sunk at the Attack on Pearl Harbor, December 7, 1941.

All content from Kiddle encyclopedia articles (including the article images and facts) can be freely used under Attribution-ShareAlike license, unless stated otherwise. Cite this article:
Glendale Veterans War Memorial Facts for Kids. Kiddle Encyclopedia.