The park covers 170 square kilometres of hillside above Glenveagh Castle on the shore of Lough Veagh (Loch Ghleann Bheatha), 20 km from Gweedore in County Donegal. The network of mainly informal gardens displays a multitude of exotic and delicate plants from as far afield as Chile, Madeira and Tasmania, all sheltered by windbreaks of pine trees and ornamental rhododendrons. 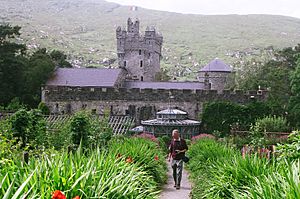 The estate was established by John George Adair, who became infamous for evicting 244 of his tenants and clearing the land so they would not spoil his view of the landscape. The gardens and castle were presented to the Irish nation in 1981 by Henry P. McIlhenny of Philadelphia who had purchased the estate in 1937.

The castle was built by Captain John George Adair (1823–1885), a native of County Laois, and a member of the minor Anglo-Irish gentry. Adair had made his fortune in the United States, and he returned to Ireland and bought up vast tracts of land in Donegal. Adair had married in 1869, Cornelia Wadsworth Ritchie, a daughter of James S. Wadsworth, a Union Army General in the American Civil War. Together they set about the creation of the gardens and castle. Adair's ambition was to create an estate and castle that surpassed Balmoral Castle, Queen Victoria's retreat along the River Dee in Aberdeenshire, Scotland.

His troubles with his Irish Catholic tenants on his land began immediately. A row between them and Adair over hunting and fishing rights and trespassing sheep culminated in the assassination of Adair's Scottish steward James Murrog. Consequently, John Adair evicted 44 families (224 people total) from their blackhouses on his land. The evictions, which took place during a time of severe famine, earned him the title "Black Jack Adair".

His widow Cornelia Adair (1837–1921) took over ownership of the castle and estate after John Adair's death in 1885. She lived part-time at Glenveagh Castle, and improved the beauty of the castle grounds. She brought much biodiversity with both practical and exotic ambitions. Practical being Fast Growing and long living Pines that would offer wind shelter to the castle and gardens. The pines along the river and lake also helped prevent the flooding of the grounds and along the banks. The pleasure grounds were created as a garden oasis that would showcase exotic and native plants, trees, and flowers from around the world. The Rhododendron was brought in as an ornamental as well as practical solution for wind breaking and protection. Mrs Adair's long Rhododendron hedge had grown into a tall wall that followed the drive up to the castle. This was a wonderful wind shelter and introduction to coming up to the castle. December 2018, this historical hedge was destroyed entirely to put in a new water pipe.

Henry Plumer McIlhenny of Philadelphia, USA purchased the estate in 1937. McIlhenny left the gardens and castle to the Irish State in the 1970s, but continued to use the castle as a part-time residence until 1982.

The park is home to the largest herd of red deer in Ireland and the formerly extirpated golden eagle were reintroduced into the park in 2000.

There is no park ranger in Glenveagh National Park. All decisions are made by administration that is an extension of the department of environment of the Irish Government.

In winter 2018 and spring 2019, many native and non-native trees and plants were cleared from the park, and the water and pipe system was updated.

All content from Kiddle encyclopedia articles (including the article images and facts) can be freely used under Attribution-ShareAlike license, unless stated otherwise. Cite this article:
Glenveagh Facts for Kids. Kiddle Encyclopedia.