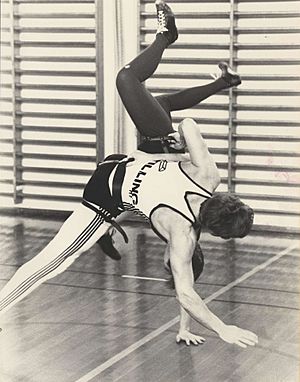 Glíma is an Old Norse word meaning glimpse or flash, and is the name of the Scandinavian martial arts system used by the Vikings over 1200 years ago.

Glima as a self-defence system contains throws, blows, kicks, chokes, locks, and pain techniques, and is comparable with the best complete martial arts systems from around the world. Glima as self-defence was the foundation for the Viking warrior, and these techniques are still practiced in Scandinavia, Europe, North America and South America.

Glima as a sport is often called Viking wrestling and covers several types of Scandinavian folk wrestling: Lausatök, Brokartök and Hryggspenna. Lausatök (Loose-grip or Free-grip) is the most wide spread form of glima practiced in Norway. It is quite aggressive form of wrestling where the match the winner is considered the one who is standing up while the opponent is lying on the ground. Hryggspenna (Backhold) is a form of wrestling where the opponents take hold of each other's upper body with a grip around the back; whoever touches the ground with any part of the body except the feet has lost. Brokartök (Trouser-grip) the most widespread in Iceland and Sweden. In this type of Glima, the wrestlers hold each others trousers by the waistline, or by a special Brokartök glima belt, then attempts to trip and throw their opponent.

Christian priests regarded Glima as a pagan activity and tried to eliminate it when Scandinavia, became Christian. The people of Scandinavia however thought it good for physical and moral development and continued to practice the sport. Brokartök glima has been the national sport of Iceland for over 100 years.

All content from Kiddle encyclopedia articles (including the article images and facts) can be freely used under Attribution-ShareAlike license, unless stated otherwise. Cite this article:
Glima Facts for Kids. Kiddle Encyclopedia.