Glochidion ferdinandi, with common names that include cheese tree (see below), is a species of small to medium–sized trees, constituting part of the plant family Phyllanthaceae. They grow naturally across eastern Australia, from south–eastern New South Wales northwards to northern and inland Queensland, in rainforests and humid eucalypt forests. Frugivorous birds such as pigeons, figbirds and parrots consume its fruit. 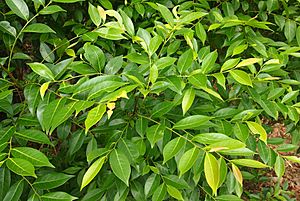 It grows as a woody shrub or small tree to 8 metres (26 ft), although occasionally reaching 30 metres (98 ft), with flaky brownish-grey bark. It has simple alternate-arranged elliptical leaves 3–10 centimetres (1.2–3.9 in) in length and 1.5–4 centimetres (0.59–1.57 in) wide; the species may be partly deciduous in winter. Flowering may occur at any time of year; the cheese tree has both single female and male flowers, which are found in groups of three. Both sexes are green-yellow, with the male flowers about 0.7 cm and the female 0.5 cm in diameter. The most notable feature are the small pumpkin-shaped fruit, which are green at first before turning shades of white and pink. Divided into segments radially, they eventually split open to reveal bright red 0.5 cm seeds from November to April. 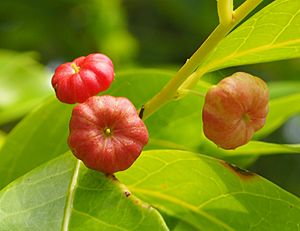 The species was originally described by Swiss botanist Johannes Müller Argoviensis in 1865 as Phyllanthus ferdinandi before being given its current binomial name by Frederick Manson Bailey in 1902. Its specific epithet honours Victorian State Botanist Ferdinand von Mueller. Note that the specific name is spelled with a single or double "i" by various sources.

An uncommon variety, pubens, known as the hairy cheese tree, is smaller, with leaves and fruit finely hairy.

It is found from central Queensland to the vicinity of Ulladulla (35° S) in southern New South Wales.

Glochidion ferdinandi presumably is dependent on leafflower moths (Epicephala spp.) for its pollination, like other species of tree in the genus Glochidion. Leafflower moths, including the species Epicephala colymbetella, have been collected from fruit of this species. Although leafflower moths actively pollinate Glochidion flowers, the adult moths also lay eggs inside the flowers, where their caterpillars later consume a subset of the developing seeds in the fruit. G. ferdinandi is unusual (although not unique) among species of Glochidion in that the fruit contain empty carpel chambers within which E. colymbetella caterpillars pupate, and adult moths emerge.

Glochidion ferdinandi is a long-lived species which may live for 60 years or more. It may sucker or resprout after bushfire. Seeds take 1–4 months to germinate.

It is an easily grown pioneer species useful in bush regeneration and natural landscaping of areas to which it is native in eastern Australia. The species may colonise disturbed areas, and is a fast-growing plant. Plants require ample water but adapt to a wide range of soils and sun or shade. It can be grown as an indoor plant in a bright position.

The dried fruits, which resemble miniature pumpkins, are found in potpourri and sold as "putka pods".

All content from Kiddle encyclopedia articles (including the article images and facts) can be freely used under Attribution-ShareAlike license, unless stated otherwise. Cite this article:
Glochidion ferdinandi Facts for Kids. Kiddle Encyclopedia.