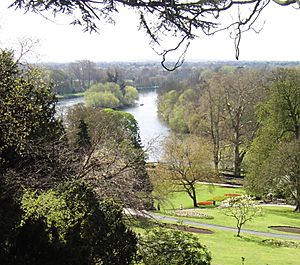 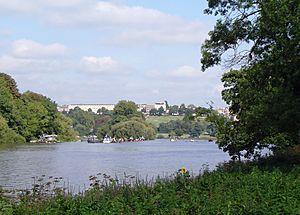 Glover's Island from upstream with Richmond Hill beyond

Glover's Island (originally called Petersham Ait) is in a section of tidal river formerly known as Horse Reach on the Thames, between Richmond Lock and Teddington Lock in the Borough of Richmond upon Thames, London, England.

The tree-covered islet has been precisely measured as 0.536 acres (0.217 ha) above a shown limit of ordinary high tides.

In 1872 the island, then called Petersham Ait, was bought by a Richmond-based waterman named Joseph Glover for £70 (equivalent to £4,000 in 2021); advertising it for resale in 1895. Sir J. Whittaker Ellis, Charter Mayor of Richmond lived within view declined to buy it at £5,000 (equivalent to £414,000 in 2021) and suggested that the Richmond Corporation should be approached.

"That while the Committee think it desirable that the Island should be acquired for the Corporation if it could be obtained at a reasonable price, they are of the opinion that in view of the sum now named, it would be useless to enter into any negotiation for its purchase."

Trying again in 1898, Glover caused a scandal by putting the island up for auction and suggesting it could be sold to Pears soap to erect a giant advertising hoarding.

Glover used this threat to vex the corporation, offering it to them for £4,000 but although the corporation wanted to buy the island, it was felt that there was no justification in spending such a large sum of money out of its funds.

There then followed a lengthy debate and correspondence in the local press about preserving the view from Richmond Hill and suggestions were made that the purchase should be funded jointly by public subscription and the corporation.

By September, only £50 had been given to the public fund and the disclosure that Glover had purchased the island in 1872 for £70 did not help the collection.

The auction took place on 21 September but the highest bid was only £200. An unnamed resident had offered Glover £1,000 for the island (which he then intended to present to the corporation), but Glover refused to sell and also withdrew the island from sale.

In 1900 Max Waechter, who lived in Terrace House, Richmond Hill, bought it for £1,600 and conveyed it to the council imposing terms registered against its land records it was never to be developed.

All content from Kiddle encyclopedia articles (including the article images and facts) can be freely used under Attribution-ShareAlike license, unless stated otherwise. Cite this article:
Glover's Island Facts for Kids. Kiddle Encyclopedia.