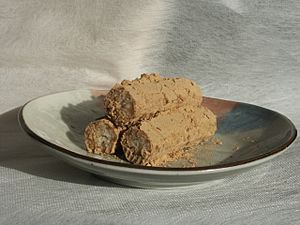 Gokabo (五家宝) is a Japanese sweet produced and sold in Saitama, especially Kumagaya city. It is one of the top three sweets in Saitama, along with Soka rice cake (Senbei) of Soka city and potato sweets (Imogashi) of Kawagoe city.

They are manufactured by hand. A starch-like core is placed in a pan and wrapped with starch syrup. Then, soybean powder (Kinako) is placed on the surface. They can be made in different colors by using different-colored soybeans, such as blue soybeans. It was introduced 140 years ago and was sold at Tadenji Temple in Fudogaoka. It was sold under the name of "5 rice bar" during the Edo period. It is occasionally served in school meals for public elementary and junior high schools in modern times. It costs about 400 yen for twelve pieces.

All content from Kiddle encyclopedia articles (including the article images and facts) can be freely used under Attribution-ShareAlike license, unless stated otherwise. Cite this article:
Gokabo Facts for Kids. Kiddle Encyclopedia.