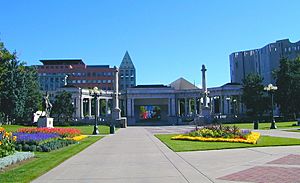 Civic Center Park is located on the northern part of the Golden Triangle Neighborhood, although the park itself is often considered to be part of downtown.

The Golden Triangle is a neighborhood near uptown Denver, Colorado, USA. Many civic and cultural institutions are located in the northern part of the neighborhood, in an area called the Civic Center.

According to the U.S. Census, the population of the neighborhood is 1,577. 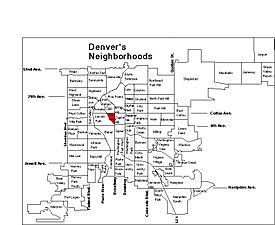 The Golden Triangle highlighted on this map of Denver's neighborhoods.

The Downtown Denver Partnership, and the Golden Triangle Neighborhood Association define the Golden Triangle as extending one block east to Lincoln Street, thereby incorporating almost all of Civic Center Park and the institutions surrounding them (with the exception of the Colorado State Capitol in the Capitol Hill neighborhood and a few buildings to the north of Colfax Avenue). The main arterial street through the Golden Triangle is Bannock Street. 13th, 14th, and 8th avenues are important east-west arterials as well. All of the streets that provide the borders for the neighborhood (Lincoln/Broadway, Colfax, and Speer) are important transportation corridors for Denver.

The Golden Triangle is one of the oldest neighborhoods in Denver, with many single family Victorian homes and bungalows built in the late 19th and early 20th centuries. Between 1904 and 1919, Denver Mayor Robert Speer completed his ambitious plan for the Civic Center area, adding many civic institutions and a neoclassic park to the north of the neighborhood, and placing a leafy concrete urban canyon around Cherry Creek, creating Speer Boulevard, the neighborhood's western and southern border.

Starting in the 1990s, perhaps as the result of the new Central Library, the neighborhood began its transformation into a functional multi-use neighborhood. New condominium and loft developments came into the neighborhood, and many of the old supply stores and garages were transformed into restaurants, art galleries, and small offices. 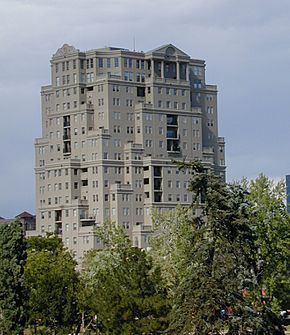 There is some neighborhood concern that the area is developing too quickly. Some Denverites criticize some recent condominium developments of Craig Nassi such as the Prado, a luxury 18-story neo-historic French-style building. There are three of these developments built in the last five years by Nassi, who apparently combined different property's entitlements to get around the height restrictions of the neighborhood. While the developments are legal, some critics say the zoning does not really intend for his condominiums to be built in the Golden Triangle. Some of the people who purchased units in his buildings have alleged shoddy craftsmanship and bad business practices. The homeowner's association of Nassi's Beauvallion property have filed a lawsuit against him.

All content from Kiddle encyclopedia articles (including the article images and facts) can be freely used under Attribution-ShareAlike license, unless stated otherwise. Cite this article:
Golden Triangle, Denver Facts for Kids. Kiddle Encyclopedia.