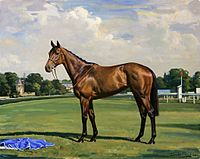 Goldikova (foaled 15 March 2005 – 6 January 2021) was a champion Thoroughbred racemare. She has also raced in the United States and England. She has won 14 Group One races, with nine victories over colts and geldings. Goldikova was the only horse to win three (2008, 2009, 2010) Breeders' Cup Mile races. She was ridden by Olivier Peslier. She retired in 2011.

All content from Kiddle encyclopedia articles (including the article images and facts) can be freely used under Attribution-ShareAlike license, unless stated otherwise. Cite this article:
Goldikova Facts for Kids. Kiddle Encyclopedia.