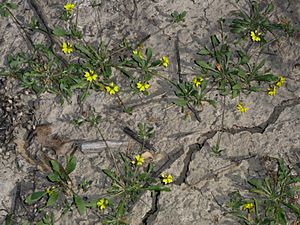 Goodenia heteromera, commonly known as spreading goodenia or fan flower, is a species of flowering plant in the family Goodeniaceae and is endemic to south-eastern Australia. It is a perennial or annual, stolon-forming herb with lance-shaped to egg-shaped leaves with the narrow end towards the base, and racemes of yellow flowers with brownish markings.

This goodenia grows in heavy soil in Eucalyptus camaldulensis and E. largiflorens woodland in the Murray–Darling basin in Queensland, New South Wales, Victoria and South Australia.

Goodenia heteromera is classified as of "least concern" under the Queensland Government Nature Conservation Act 1992.

All content from Kiddle encyclopedia articles (including the article images and facts) can be freely used under Attribution-ShareAlike license, unless stated otherwise. Cite this article:
Goodenia heteromera Facts for Kids. Kiddle Encyclopedia.