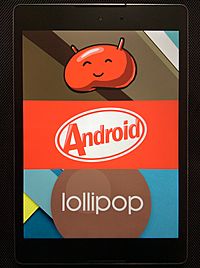 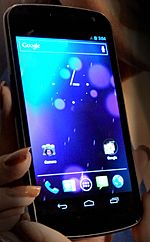 Galaxy Nexus, the third in the series

Phones in the series:

Tablets in the series:

The series also had a media streaming device known as the Nexus Q, however it was never officially released because it didn't have enough features to make it worth using.

All content from Kiddle encyclopedia articles (including the article images and facts) can be freely used under Attribution-ShareAlike license, unless stated otherwise. Cite this article:
Google Nexus Facts for Kids. Kiddle Encyclopedia.