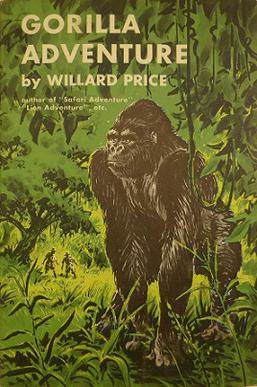 Gorilla Adventure is a 1969 children's book by the Canadian-born American author Willard Price featuring his "Adventure" series characters, Hal and Roger Hunt. It depicts an expedition to capture a giant mountain gorilla for a circus.

The location was post-colonial Congo. As usual, the greatest danger posed to the brothers, and to the animals, came not from the wild beasts but in the form of humans. The two main primary antagonists were: one inept, boastful but cowardly Belgian (Andre Tieg) who passes himself off as a guide, and a poacher of gorillas, called Nero, whose primary method was to slaughter all adults and take the young gorillas.

In the midst of the dangers, Roger becomes temporarily blinded by a spitting cobra. One villager refers to a gorilla as a 'man who can't speak' in a reference to gorilla intelligence.

The safari team are complete in this adventure.

All content from Kiddle encyclopedia articles (including the article images and facts) can be freely used under Attribution-ShareAlike license, unless stated otherwise. Cite this article:
Gorilla Adventure Facts for Kids. Kiddle Encyclopedia.