Government of Omaha facts for kids 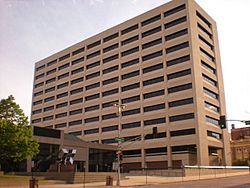 Seal of the City of Omaha

Omaha operates under a strong mayor form of government. The mayor, who does not serve on the council, and seven council members are all elected to four-year terms. The mayor appoints commissioners and other officials who oversee the various departments. In addition to the mayor, Omaha's two other citywide elected officials are the clerk and the treasurer.

The Omaha City Council is the legislative branch and is made up seven members elected from districts across the city. The council enacts local ordinances and approves the city budget. Government priorities and activities are established in a budget ordinance approved annually. The council takes official action through the passage of ordinances and resolutions.

The City of Omaha has considered consolidating with Douglas County government.

The current Mayor of Omaha is Jean Stothert, a member of the Republican Party. The City Clerk is Buster Brown and members of the City Council are Pete Festerson from District 1; Ben Gray from 2; Chris Jerram from 3; Garry Gernandt, Council President, from 4; Rich Pahls from 5; Franklin Thompson, Council Vice-President from 6 and; Aimee Melton from 7.

All content from Kiddle encyclopedia articles (including the article images and facts) can be freely used under Attribution-ShareAlike license, unless stated otherwise. Cite this article:
Government of Omaha Facts for Kids. Kiddle Encyclopedia.