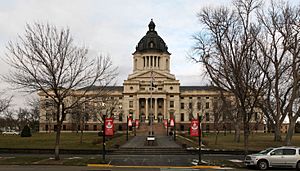 The Governor of South Dakota heads the executive branch of the state government. The current governor is Dennis Daugaard, a Republican from Garretson. The state constitution gives the governor the power to either sign into law or veto bills passed by the state legislature, to serve as commander-in-chief of the state's armed forces, to appoint a cabinet, and to commute criminal sentences or to pardon those convicted of crimes. The governor serves for a four-year term, and may not serve more than two consecutive terms.

Native Americans' governments are significantly independent of the state and its local governments. For example, federal law forbids states and local authorities to tax Indian lands.

All content from Kiddle encyclopedia articles (including the article images and facts) can be freely used under Attribution-ShareAlike license, unless stated otherwise. Cite this article:
Government of South Dakota Facts for Kids. Kiddle Encyclopedia.