Government of Washington facts for kids 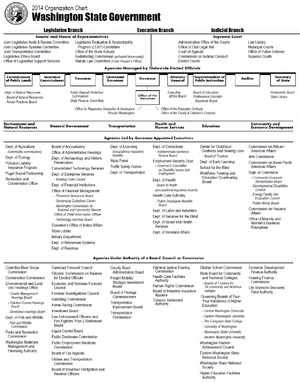 The executive branch of the state's government is organized as a plural executive, in which the heads of the principal departments are filled by individually elected officials. In addition to the Governor of Washington, the state constitutional officers are: the Lieutenant Governor, the Attorney General, the Secretary of State, the Treasurer, the Auditor, the Commissioner of Public Lands, and the Superintendent of Public Instruction. Additionally, a number of state departments are governed and managed by independent commissions, including the Department of Fish and Wildlife and the Department of Transportation. Heads of the remaining departments are appointed by the Governor, with the advice and consent of the Washington State Senate. The Governor also enjoys a line item veto, the power to issue pardons and commute death sentences, and he acts as commander-in-chief of the state's military forces.

The offices of each of the state constitutional officers are established in the Washington constitution, with the exception of that of the Insurance Commissioner, which was created by statute. They are each elected on a partisan ballot to concurrent four-year terms, except for the Superintendent of Public Instruction who is officially non-partisan.

The Washington State Register (WSR) is a biweekly publication that includes activities of the government. The Washington Administrative Code (WAC) is the codification of regulations arranged by subject and agency.

All content from Kiddle encyclopedia articles (including the article images and facts) can be freely used under Attribution-ShareAlike license, unless stated otherwise. Cite this article:
Government of Washington Facts for Kids. Kiddle Encyclopedia.