Governor's Square is a super-regional shopping mall located on Apalachee Parkway in Tallahassee, Florida. Its two-level design was a first for northern Florida when it opened in 1979, and was for many years the newest of two enclosed malls in the Tallahassee area, the other being The Centre of Tallahassee, formerly the Tallahassee Mall. The anchor stores are JCPenney, Macy's, and Dillard's. There is 1 vacant anchor store that was once Sears.

Built into a hillside, the mall can be entered either on the first or second level, depending on where a particular entrance is located. The mall's original anchors, J. C. Penney, Sears and Maas Brothers, anchored the original structure. Maas Brothers was converted to Burdines in 1991. A 1993 expansion included an additional wing as well as Dillard's becoming the fourth anchor. In 2015 the Governor's Square Mall received a $10 million interior and exterior renovation. In March 2005, the Burdines store was converted to a Macy's. 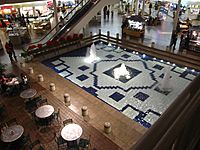 The center court of Governor's Square in 2011.

On December 28, 2018, it was announced that Sears would be closing as part of a plan to close 80 stores nationwide. The store closed in March 2019.

All content from Kiddle encyclopedia articles (including the article images and facts) can be freely used under Attribution-ShareAlike license, unless stated otherwise. Cite this article:
Governor's Square Facts for Kids. Kiddle Encyclopedia.