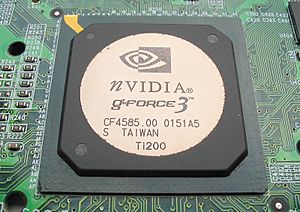 A graphics processing unit (GPU) is a processor that renders (or creates) images, animations, and graphics and displays them for the computer’s screen. A strong GPU is able to process complex animations and graphics smoothly and efficiently.

There are generally two types of images which GPU has to calculate, which is also called rendering. Most applications like the operating system’s desktop (except e.g. Windows Vista’s Aero Desktop) or office applications, the GPU has to render two dimensional (2D) pictures. Modern GPUs are so powerful that there is no difference in 2D performance between low-cost and expensive GPUs.

Some applications use 3D pictures to simulate three-dimensionality. Examples for such applications are computer and video games or applications for design and technical construction (CAD). The 3D acceleration performance of GPUs differs greatly. Generally, more expensive GPUs can render faster than low-cost ones.

Nvidia, AMD, and Intel are the most common designers of graphics cards. However, many manufacturers work with these three companies to manufacture the actual hardware. These manufacturers include, but are not limited to, Asus, MSI, and EVGA. AMD and Intel sometimes include integrated GPUs embedded in their CPUs but these are not as powerful as a dedicated external GPU that is seperate from the CPU.

The first graphics cards were used in the 1970’s within arcade machines as a cheaper alternative to random access memory (RAM). However, graphics cards were not viable for consumer products until the release of the Large Scale Integration (LSI) circuit chip in the 1980’s. During the early-to-mid 1990’s, graphics cards that were capable of 3D support became more common in arcade, computer, and console games. The first consumer-level GPU meant for personal computers was the Nvidia GeForce 256, which was released in 1999.

GPUs are commonly used in computers and video game systems to render graphics for video games that may not be playable without the proper GPU. However, other devices such as virtual reality headsets and driverless cars also use GPUs. GPU computing, which every tasks that a GPU can do, includes calculations, artificial intelligence programming, photo editing, and other applications.

Most GPUs made since 1995 support YUV color space and hardware overlays, and many GPUs made since 2000 also support MPEG primitives. This process of hardware accelerated video decoding. Most recent graphics cards even decode high-definition video on the card, offloading the central processing unit. 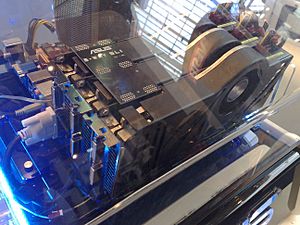 All content from Kiddle encyclopedia articles (including the article images and facts) can be freely used under Attribution-ShareAlike license, unless stated otherwise. Cite this article:
Graphics processing unit Facts for Kids. Kiddle Encyclopedia.