The Great Cockcrow Railway is a 7 1⁄4 in (184 mm) gauge miniature railway located near Chertsey, Surrey, UK. It is usually open on Sunday afternoons from May to October inclusive, plus Wednesday afternoons during August as well as May Bank Holiday.

This 7 1⁄4 in (184 mm) gauge railway originated in 1946 when John Samuel started construction in the garden of his house, 'Greywood', on the Burwood Park estate at Walton-on-Thames. With the help of a group of volunteers the Greywood Central Railway developed into one of the foremost of its type in the country until by 1962 a run of 3/4 mile was possible. From the first the line was properly signalled and ultimately worked to a timetable. Samuel's death in October 1962 threw the railway's future into doubt but the publisher, Ian Allan, purchased the line and, with the assistance of most of the GCR volunteers, a few of whom are still involved, moved it to its present site at Hardwick Lane, Chertsey. It reopened to the public on 14 September 1968 under the new name Great Cockcrow Railway, taken from Cockcrow Hill which rises on its south side.

Since that time the railway has been developed and enlarged, some two miles of track now being in the layout. Two different routes are offered to visitors, each of about 1.25 miles, a journey time of around twenty minutes.'Red Route' trains terminate at the country station, Cockcrow Hill, while 'Green Route' trains pass through that station to traverse a 350m-long loop beyond it. Return routes vary also.

The most recent innovation is a proper station building, completed in 2014 after several planning, financial and constructional delays. As expected it houses a Tea Room and toilets, including disabled facilities, as well as the booking office and staff accommodation. The railway is open to the public on Sundays from the beginning of May to the end of October between 1.00pm and 4.30 pm, (booking office closes 4.00pm.) as well as Wednesdays in August. A Gala Day with visiting engines is held in September, and on the last Saturday in October Halloween is celebrated with night-time operation. 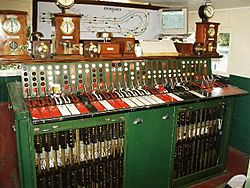 Prototypical working with full track circuiting and accurate signalling remains the key to the railway's operation. The two termini are controlled by semaphores while the whole of the main line is equipped with colour-lights, 10 of these being automatic. The boxes at Hardwick Central and Everglades Junction are fitted with Westinghouse 'L' type frames with, respectively, twenty-three and thirty-one miniature levers. The former was once part of the 227-lever installation at Crewe South junction while the latter is the complete frame from South Croydon Junction. The country terminus, Cockcrow Hill, has a 16-lever full-size 'knee' frame manufactured by the Railway Signal Company, probably around 1930. It came from the Waterloo terminus of the Waterloo & City line.

Exactly as in full-size practice trains are offered and accepted between signal boxes by the use of Block instruments. Hardwick is configured as a Midland box, Everglades is configured as a Southern box. Because of the complication of the area it controls, and there may be as many as six trains on the track diagram at once, Everglades Junction box is also equipped with a train describer to assist the signalmen, usually two on duty together, in keeping track of movements. The train describer is also of great use in logging locomotive activity over the course of a season, and calculating average route miles.

The signalling system is all-electric, including the interlocking, semaphores being worked by solenoids sealed for outdoor use. All signals are weighted to return to 'danger' when the train has passed into the next track-circuit section. Points have a mechanism powered by the very reliable Ford Escort windscreen wiper motor that moves the blades and then locks and detects them, no detection means no signal! The few sprung points in the facing direction are also electrically detected with micro-switches to ensure closure after a train has passed through in the trailing direction.

There are presently 41 steam engines and 12 instant start locomotives in the stud, all owned by the railway or individual members of the operating team. Seven or eight can usually be seen on operating days, with several other types resting, or under construction by members.

Most of the steam locomotives are based on British mainline prototypes built to 1/8 scale. All four pre-Nationalisation companies are represented and locos from both pre-Grouping and BR 'Standard' eras are present, as well as some freelance types. The oldest, a North Eastern Railway class 'R1' (LNER D19) 4-4-0 was built in 1913 and is still in working order. The smallest is a Midge 0-4-0T while the largest are the 4-6-2 'Pacifics',the oldest being a freelance version built by Louis Shaw in 1927 and given the name 'Eureka' by Sir John Samuel in 1947 as he had found, in his opinion, the ideal engine for his railway. Other Pacifics represent prototypes from the LMS, LNER and Southern companies, as well as British Railways. Engines of 2-6-0 and 4-6-0 wheel arrangement feature as do 'Atlantics' from both the GNR and LBSCR alongside 0-8-0, 2-8-0 and 2-10-0 goods engines. A comprehensive list follows.

Rolling stock consists of 28 4-seater 'sit-in' carriages plus 4 further coaches that are articulated into twins. All passenger carriages and locomotives are fitted with vacuum brakes. Trains hauled by the smaller engines are generally made up of three carriages to accommodate 12 passengers; the more powerful locos can haul four carriages, carrying up to 16 passengers. The all-up weight of a 3-car train - without the engine - is estimated on average to be about 11⁄4 tons or 1270 kg. A varied collection of freight and engineering stock may also be seen.

All content from Kiddle encyclopedia articles (including the article images and facts) can be freely used under Attribution-ShareAlike license, unless stated otherwise. Cite this article:
Great Cockcrow Railway Facts for Kids. Kiddle Encyclopedia.