Greektown is a neighborhood located in Baltimore, Maryland, United States.

In 2014 Greektown was home to around 600 families. During the neighborhood's peak there were around 1,000 families.

Greektown has been home to a thriving Greek American community since the 1930s. Once known simply as The Hill, during the 1980s its residents petitioned the Baltimore City Council to change the name of the neighborhood to Greektown. 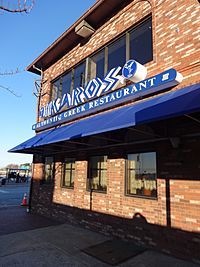 As of 2010, Greektown is about 50.9% white, 22% Hispanic, 17.8% African American, 6.3% Asian, and about 3% all other. A thriving self-contained residential and business community consisting of single family town houses, Greektown is noted for its many restaurants, authentic Greek coffee houses, bakeries and small businesses of many types. It is a diverse community of largely blue-collar people of numerous ethnic derivations. Greektown is mostly Greek and other European descendants, but also includes large numbers of people of Native American, Asian, African-American and Hispanic (particularly Puerto Ricans, Mexicans, Dominicans, and smaller numbers of Guatemalans and Salvadorans) ancestry living in a low crime environment.

The neighborhood is home to many Greek restaurants, and to the Saint Nicholas Greek Orthodox Church. It is home to the annual Baltimore Greek Festival and Parade. 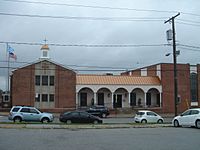 All content from Kiddle encyclopedia articles (including the article images and facts) can be freely used under Attribution-ShareAlike license, unless stated otherwise. Cite this article:
Greektown, Baltimore Facts for Kids. Kiddle Encyclopedia.