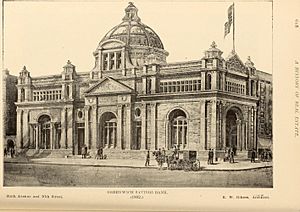 The Greenwich Savings Bank was an American savings bank based in New York City that operated from 1833 to 1981. At the time of its closure in 1981, it was the 16th largest bank in the U.S. by total deposits.

The Greenwich Savings Bank was chartered in 1833 in New York City. At its height, it had branches in New York City, Nassau County and Westchester County, with $2.5 billion in assets.

By the time of bank deregulation in 1980, the bank started having big losses. In 1981, the Federal Deposit Insurance Corporation (FDIC) and the New York State Banking Department sought buyers for the bank. In October of that year, a participant in a meeting about possible buyers left material on the meeting table. This information was given to The New York Times, which printed the story.

In its final three days, the bank lost $500 million in deposits out of its total of $1.5 billion due to a run on the bank. At the end of the third day, the New York State Banking Department closed the bank, naming the FDIC as receiver. That same day Metropolitan Savings Bank of Brooklyn was named the new owner of the bank accounts. Three years later, the combined bank was renamed Crossland Federal Savings Bank, which failed in 1992 and was seized by the FDIC. Shares in Crossland were offered to the public in 1993; Crossland was acquired by Republic New York in 1995.

In 1922-24, the bank constructed its new headquarters at the intersection of Broadway and West 36th Street in Midtown Manhattan. The steel-reinforced limestone and sandstone building was designed by noted bank architects York and Sawyer in a Classical Revival style with monumental Corinthian columns on three sides of the building, rusticated walls and a Roman-style dome.

The interior was embellished with ten-foot-tall brass foyer doors, a board room and executive office with rubbed-oak paneling and soapstone fireplaces, and an elliptical banking room with limestone Corinthian columns, granite walls, a marble floor, a bronze tellers' screen with sculptures of Minerva (symbolizing wisdom) and Mercury (representing commerce), and a coffered, domed ceiling with a 3,000-square-foot (280 m2) stained-glass skylight.

Haier America purchased the building in 2000 to be its American corporate headquarters. In 2002, Haier rechristened it The Haier Building.

An event management company leases several of the Haier Building's large historic rooms, which are operated as the venue Gotham Hall. The old main banking room, board room and executive office are rented out as the "Grand Ballroom", "Oak Room", and "Green Room", for corporate events, private parties such as weddings and receptions, and other functions.

Both the exterior and the first floor interior of the building were designated New York City landmarks in 1992, and the building was added to the National Register of Historic Places in 2005.

All content from Kiddle encyclopedia articles (including the article images and facts) can be freely used under Attribution-ShareAlike license, unless stated otherwise. Cite this article:
Greenwich Savings Bank Facts for Kids. Kiddle Encyclopedia.